Candidates Race to the Finish Before OK Primary Election 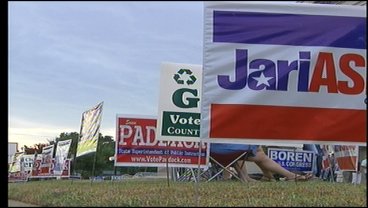 DURANT, OK--Less than 24 hours before election day, hundreds of Oklahoma voters gathered in Durant to get a chance to meet the candidates.

The hot topic among many candidates was how they would bring jobs to the state. Howard Houchen running for District 2 US Representative says that freeing Oklahoma from many federal regulations could move the market forward.

Dustin Roberts is running for District 21 State Representative and says that getting businesses in Oklahoma starts with tax breaks.

"Enticing Texas companies and Kansas companies to come to Oklahoma with tax incentives, a higher educated workforce, which in the state of Oklahoma, we have some of the best workers in the world," Roberts said.

Attorney General Drew Edmondson, running for governor on the blue ballot, says that natural gas is an abundant resource that should be utilized--and other technologies can also spur growth.

"Wind energy, in medical research, in aviation and aerospace and bio fuels--all of those are potential job creators that we need to develop," Edmondson said.

"The mom and pop businesses on Main Street of our communities, to create the kind of a business climate that allows these existing businesses to expand and we show that we are growing and that has an opportunity to be a magnet for other jobs," Askins said.

These candidates have just hours before voters pick which names will show up on the November ballot.