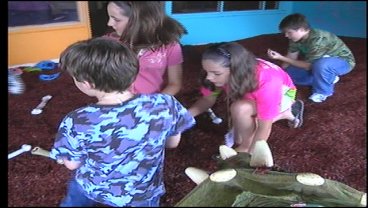 DENISON, TX--Texoma volunteers and local businesses teamed up with kids for an "Amazing Race." Similar to the reality TV show, the Big Brothers Big Sister's Amazing Race was an elaborate scavenger hunt.

Competitors were divided into teams and played games and had to find clues to guess their next destination.

A spokesperson from Big Brothers Big Sisters says that they hope to raise awareness about their mentoring organization.

One stop was the Texoma Children's Museum in Denison.

"How cool is that? I mean even as we grow up, that's just one of those things that's just so exciting so to have something down here, I really hope it catches on, because I think each year it will just grow and as the kids grow, they'll remember and have more fun--something to look forward to every year," Sasha Best said.

Fourteen teams of up to five people competed. their final destination was the Covenant Church in Sherman.