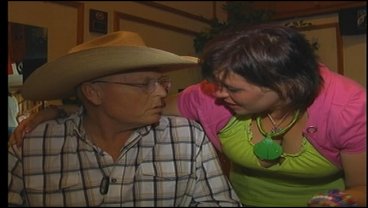 SHERMAN, TX--It's the first time that Jim Smith has cut his hair in 15 years. He's doing it for Locks of Love and to show his support for his friend Johnnie Jones who has cancer.

"And I had a lot of friends with cancer and I know what it's like going through," Jim Smith said. "I don't ever want to have to do it, but you do what you can do to help."

Smith is Jones' friend and coworker from Tyson. In December 2008, Jones was diagnosed with pancreatic cancer. Saturday, his friends and family have put together a benefit to help him fight his disease.

"It's unbelievable what these guys have done for me, and helping me with my disease and getting me through some hard times," Jones said.

Bands played, and a raffle and auction were held to help raise nearly $5,000. Friends of Jones' have been planning for months for this moment.

"If I was in his shoes, he'd be there with me, doing the same thing, good guy," Tony Carvajal said.

Jones admits that the experience has been unreal, and his daughter keeps hoping that he's healthy.

"You lose all thoughts," Jones said. "You don't understand anything for a while until you get a grip on what's going on and find out exactly what's happening."

Jones says that his family and friends have kept him going.

"My wife has taken me to every one of my treatments, been to every surgery course, that's normal. My kids, cousins friends--everybody I work with. They've been pulling me and praying. It's been a rough experience," Jones said.

This weekend Jones' family celebrates, and helps him fight, for a cure.