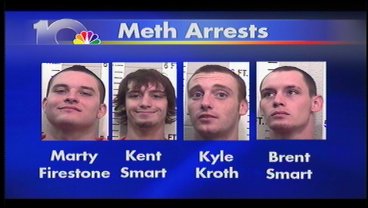 HEALDTON, OK--Four men are in jail after the Healdton, Oklahoma Police Department arrested them on drug charges Friday.

They were arrested after Healdton police received information of illegal drug activity at a Healdton home.

The men were found leaving a pasture--that's when they threw items in their possession and attempted to hide in brush from police.

All five men were arrested for endeavoring to manufacture meth.

Police continued the search Saturday. The men in custody led them to their meth cook near a pond where police found the ingredients and paraphernalia.