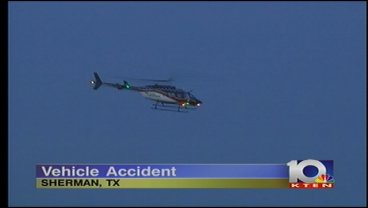 One vehicle was traveling at a high speed when it swerved into the other lane, hitting a Honda Civic. One driver was seriously injured and has been flown to Parkland hospital in Dallas.

"It appears that a vehicle--a blue Chevy Corsica--was traveling east bound going across," Sherman Police Lieutenant Bob Fair said. "It looks like it was at a high rate of speed. It hasn't been determined how fast--went into the other lane, the west bound lane, hit another vehicle--a Honda Civic--head on."

Sherman Police and fire officials were on the scene. The condition of the driver hasn't been released. The case is still under investigation.