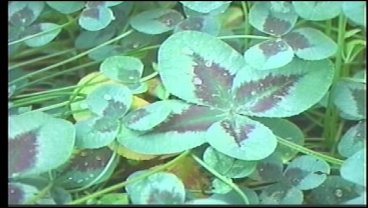 ARDMORE, OK- - Researchers in Texoma have solved the age old mystery of the 4 leaf clover.      Meredith Saldana has more on this story.

There have been many ideas as to how the 4 leaf clover came about and it's been almost impossible to track, until now.

Scientists at the Samuel Roberts Noble Foundation in Ardmore, along with The University of Georgia Athens, have discovered the genes responsible for producing the 4 leaf clover.

It's widely believed that if you find a 4 leaf clover the leaves will bring good luck to the finder.

"You know, that's actually what you were finding out there when you were looking for white 4 leaf clovers," says Dr. Joe Bouton with The Noble Foundation. "You were finding these chance mutations that were always there but in very low frequency and that's why it was lucky. You know if you found one you were lucky to find it."

Joe Bouton, Senior Vice President and Director of Forage Improvement Division at The Noble Foundation, has been working on these findings with his colleagues for the last 18 years.

"We think the story is that the primitive clovers were like this (the new findings) and then there was a mutant that blocked them that was a very stable mutant and became this, what we call the normal. All we've done is found things that have re-unblocked it."

After 10 years of working on his research at Georgia, he moved to The Noble Foundation and says with out the foundation he doesn't believe they could've come this far.

"We had so many resources here to look at the underlying genetics and especially what we call mapping these genes with molecular markers and that's really what the main part of the paper was that we published in Crop Science."

But the research wasn't just to disprove any theory's on the 4 leaf clover.

As scientists, they wanted to find the value of the clover and turns out, leaves equal nutrition for livestock and increasing the leaves, could increase the plants value.

"There's more leaves and that's where the nutritional part of the plant is in the leaves. So if you increase the leaflet size or leaflet numbers you could increase the feeding value in these."

For more information you can read The Noble Foundation article http://www.noble.org/Press_Release/2010/10-030.html.