How to Stay Safe From Snakes in Texoma - KTEN.com - Texoma news, weather and sports

How to Stay Safe From Snakes in Texoma 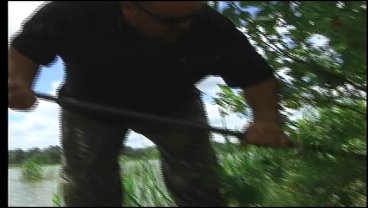 GRAYSON CO--When a snake shows up at your doorstep, it's typically looking for one thing---dinner.

"Eighty percent of the time, they've been attracted up to the structure because they're following their food prey, which in most cases is mice--just the common house mouse," Art Harmon said, pest control serviceman.

Before a snake starts to look for something to eat on a person's property, there are ways to keep it away. It starts with how you cut your lawn.

"Mow it even shorter--five to eight foot band around the perimeter of the property--almost scalp it," Roy Reed said, pest control serviceman. "You may not like the look of it, but it goes a long way to keeping snakes out. They're reluctant to cross that because predators could see them and get to them."

If you're unable to identify the snake, it's best to call pest control before trying to get rid of it with a broom. When snakes are threatened, they will attempt to defend themselves.

"Even non poisonous snakes will take a defensive posture and may even strike at you. So, it's important to know the type of species of the snake, and it most cases, just stay away from them," Harmon said.

Not all snakes are dangerous, however. Snakes keep certain pests under control.

"The non poisonous snakes--I recommend leaving them alone and not killing them because especially in the case of the king snake, he actually eats other snakes," Harmon said.

If you are bitten by a poisonous snake, home remedies may actually irritate the wound. Instead, seek professional help.

"The best thing to do is apply direct pressure as tight as you can and get immediate medical help--try to remember what the snake looks like so you can explain it to medical personnel and figure out what it is to properly administer antivenin and take care of the situation," Reed said.

Snakes only eat live prey, so getting rid of mouse problem, may be the start to keeping away snakes.