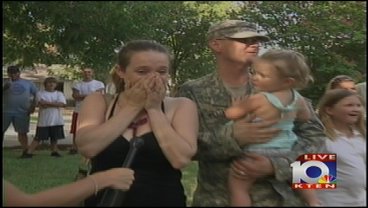 DENISON, TX -- A Denison woman who is fighting for her life as she waits for a heart transplant is being given a tremendous gift by Lowe's, a home makeover. Deeda Payton spoke with the woman and her family about what it all means to them.

A heart pump is what keeps wife and mother, Raychel Williams, alive as she waits for a heart transplant. "It's definitely scary," said Williams.

She says the past two years since her diagnosis have been tough, financially and emotionally, but her family motivates her to stay positive. "It's hard to be down about it. There's a lot of people that care and go out of their way to make life easier," said Williams. These days a lot of those people are from Lowe's. Crews from the Sherman store are giving Raychel's home in Denison a makeover as part of their Heroes program.

"We do this every year. Lowe's does it across the country so it's an outstanding program to really give back to some of our communities," said Jody Herrel. The Williams were turned down by Extreme Makeover, Home Edition, but thanks to Lowe's they are getting their wish and it's all happening in one day. "Hopefully we're going above and beyond and doing some things that hopefully will surprise them and hopefully make them feel good at least for the day," said Herrel.

It's a big gift with a lot of heart proving there are heroes and there are a lot of them right here in Texoma.