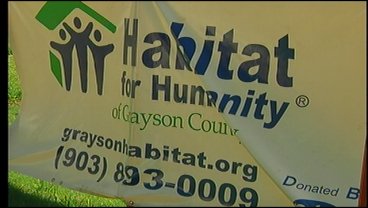 Among large national homebuilders like D.R. Horton and Centex Homes, the non-profit organization Habitat for Humanity was just ranked in the "Top 10 Builders" in the country by "Builder's Magazine."

Even when times are tough, and many large homebuilders have gone under or drastically cut back, the international organization Habitat for Humanity is doing better than ever. In fact, they are number eight in the top ten builders in America.

Just a few weeks ago, the Sheppard family in Sherman received the keys to their brand new home. Courtesy of Habitat for Humanity, they now own a home they couldn't otherwise afford.  That's why Habitat has done so well: even in a weak economy, when when many people can't get financing to purchase a home, qualified families can get a new home with low payments through the organization.

"When people need a hand-up and not a hand-out, this is an organization that people turn to. It's difficult for families to be able to afford a bank loan through traditional means, so they turn to Habitat for Humanity knowing that they're going to get a quality product, a no-interest loan, and generous terms as far as payment's concerned," said Laurie Mealy, the Director of Grayson County Habitat for Humanity.

"Builder's Magazine" also reports that Habitat for Humanity made $1.4 billion in revenue last year alone. They are currently putting more attention on buying and remodeling foreclosed and vacant homes, and making them available for sale.

Right now in Grayson County, the organization is on break for the summer since it's too hot to do construction work outside, Mealy said. But they have several lots around Texoma for a family to pick from in the fall.