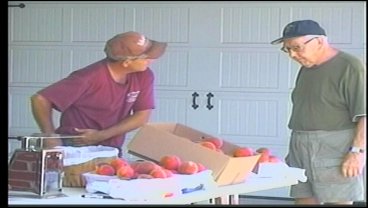 ARDMORE, OK - - Since the year 2000, the number of farmers markets across the United States have more than doubled. Meredith Saldana stopped by the Ardmore farmers market to find out how business is going this year.

Despite the hot temperatures, quite a few people turned out Wednesday morning for the Ardmore farmers market and organizers tell us, business is up.

The Market Place on Broadway has been open for 3 years and since day one it's been a hopping place on Saturday mornings.

But what many people don't know, is that a handful of farmers set up shop on Wednesday mornings and business this year is on the rise.

Market President Melvitt Chambers says, "It's been doing pretty good. They've been selling out on Wednesdays."

It seems the early bird gets the worm at this farmers market.

By 10 a.m. several vendors had already sold out of popular produce like okra, tomatoes and peas.

But there were many fruits and veggies still available, like Stratford peaches, large watermelons, cucumbers and squash.

And while it's all fresh, there's more to this Oklahoma grown produce.

"The majority of them that sell down here grow organic," says Chambers.

If you have time to drop by the market, you'll meet friendly vendors like Larry Winchester who grows and sells watermelons and cantaloupes.

"We've been raising watermelons for 30 years but we've been coming to the farmers market for 2 years now and it's been great," says Winchester.

In the last few years, interest in farmers markets across the country has spiked.

So we asked the big question, why are they so popular?

"You get it a lot fresher and for a good price," says Chambers.

Winchester adds, "They know it's locally grown and I think that has a lot to do with it."

The market is open Wednesdays and Saturdays at 7 a.m.