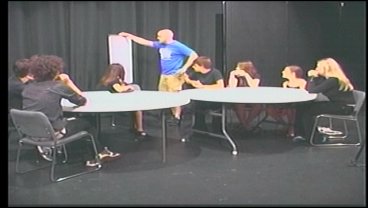 ARDMORE, OK- - We're going to introduce you to  a group of kids in Ardmore who are attending a summer camp that teaches them how to write a musical! The program at The Brass Ring is called "Let's Make a Musical". Meredith Saldana stopped by the studio to find out what it's all about.

"At it's heart it's showing kids that their voice matters," says instructor Brent Black.

This group of pre-teens and teens are brainstorming and creating their own musical this summer.

This is their third year of writing, composing and directing a musical.

Livy Simms, 11, says, "It goes from a tiny idea to this big production."

High School student Joy Quary says, "It teaches you that no idea is dumb. You can just throw it out there and it can be made into a musical."

Instructor Brent Black comes to Ardmore from New York to teach the kids how to make their ideas a successful production.

In just 6 weeks the students start with an idea and work it all the way up to a musical production they perform for an audience.

"Which part are you gonna get, did I write this part or wow, this is my scene that I wrote and I wrote this music, I composed all of this," says Simms.

The summer course is described as a combination of English class, speech, debate and theater.

Arthur Dixon, 17, says, "I think it's made me a better writer certainly, particularly in the areas of kind of writing dialogue, writing scripts, writing- certainly writing poetry and lyrics."

After the big opening show, they say all the hard work is well worth it.

"From the audience, to see it happen you know, it's a really fulfilling feeling to sort of hear someone else reading something you've written and to see people kind of responding to it in the audience," says Dixon. "It's a great feeling to know that what you've done is actually being appreciated by a group."

Quary says, "You get to sit in the audience and think I wrote that and people are laughing. I think that's a really good thing."

"I don't know if all of these kids are going to be musical theater writers but that's not the point. The point is they learned something new, they learned a new skill, they had a good time," says Black.

The musical they're working on now is called "Ticket to the Real World."

It's a satire on reality show culture, opening day is July 29th.

You can get tickets at The Brass Ring Theater in Ardmore.