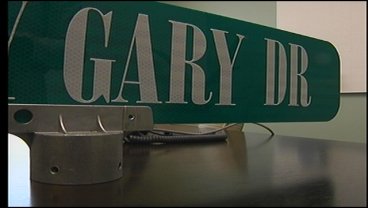 DENISON, TX--One Texoma man's years of service to the community paid off. He now has a street named after him.

The Texoma Medical Center Board of Directors presented board Chairman Jerdy Gary a street sign with his name on it.

The sign was officially put up around 1:30 PM Monday, on what was formerly Gateway Avenue.

"I'm very humbled," Jerdy Gary said. "I really was. When this happened, it was a humbling experience to me because that's something in pituitary. And especially to have it on the campus of the hospital here is even more meaningful.

Gary,a former mayor of Denison, has served as chairman of the Texoma Medical Center Board of Directors for many years.