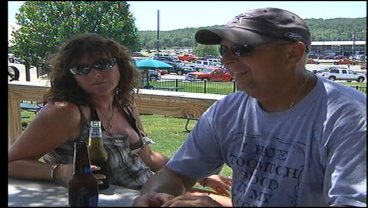 POTTSBORO, TX--It's been a day of celebration for one Texoma man diagnosed with cancer. Just a couple of months ago, he found out that he's one step closer to being cancer-free. This Sunday, he and his friends are raising money for a cure.

A professional striper fishing guide with 30 years of experience, Marc Thompson loves to be on the water, but a couple of years ago he found out that he had prostate cancer.

"Waking up one morning thinking I had a side back problem going down my left leg which had been bothering me about 8 or 9 months," Thompson said. "It got so bad that I couldn't hardly--I just couldn't hardly deal with it."

Thompson says that he didn't used to visit the doctor often, but since he was diagnosed, he goes in for regular checkups. This Sunday, he and his friends had a benefit at Highport Marina in Pottsboro to help fund prostate and breast cancer research.

"When I did chemo, I did a lot of chemo with a lot of women who have breast cancer," Thompson said. "Breast cancer with women is kind of like prostate with men."

Ron Schnitker has known Thompson since high school. He says his wife would take Thompson to his chemo visits when he couldn't take himself.

"He's a very good guy," Schnitker said. "He cares about a lot of people. He came down with his prostate caner. He's gotten involved in it, and he's had a good success rate getting over it."

Several bands performed all day for Thompson. There was also an auction and raffle.

"It's just a bunch of people who are like a big family that come together to help, and Marc has been like a member of our family," Brian Burns said.

Those putting together the event say that they hope to raise nearly $10,000 for cancer research.

"I'm kind of been the one who said give me your best shot--you know--because I'm going to do what I can to beat it," Thompson said.

Thompson hopes that his fight for a cure can inspire other cancer patients.