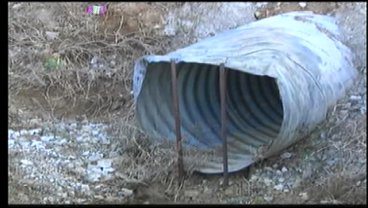 Tonight the family of Cheyenne Tippie, a 13-year old girl from Willow Springs in Bryan County who drowned last week, held an open discussion about drainage and roads. They say better conditions could have made the outcome of that tragic evening so much different.

Just one hour after the culvert flooded and Cheyenne was swept under, the water had already gone back down to just inches deep. The family says it goes to show you that these ditches are dangerous, they're uncovered, and the roads next to them are very narrow.

In fact, even the Fire Chief said they have trouble turning the trucks around when responding to calls in the Willow Springs area. He said "the ditches are so deep on the other side that if we do fail to navigate the turn, if our trucks drop off of, it's going to get stuck there and we're not gonna be able to provide."

At the meeting, several residents expressed their concern about the safety of the large drain ditches in their front yards. Cheyenne's Aunt showed everyone a picture of the teenager to demonstrate anyone, whether a child or an adult, could be swept into the culvert. They're worried it could happen to someone or something else.

Many members of the community also said Highway 70 needs to be fixed, like large potholes and short turning lanes. William Sheriff, a Mead resident, said "a lot of us, we're concerned about the roads. The right-aways aren't cut, the ditches aren't cleaned out, people are swerving around potholes."

For now, Cheyenne's family has placed a temporary piece of re barb in front of the exposed pipe in their yard, in hopes of stopping this from happening to another family in Bryan County.

Bryan County Commissioner Monty Montgomery says they do not have the money to fix these things right now, but the ditches are standard size for the area.