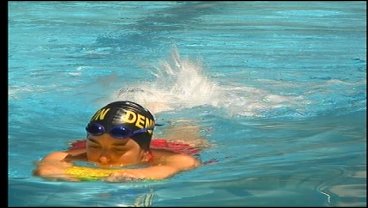 TEXOMA--With the sizzling Texoma summer well underway, it's best to stay out of the sun during peak hours, but not everyone can do that--especially those who have to work in the hot sun.

The heat may draw Texomans to the pool, but the lifeguards have to sit in the sun.

"They get breaks periodically," Chelsea Shock said, Waterloo Pool Aquatic Facility Manager. "Throughout the day we have, you know, spray bottles on the guard stands for them, so if they get overheated while they're on stand, they have that option.

Temperatures have been reaching 100 throughout the month of July, and today, the heat index is 108. Local first responders who answer heat calls say that workers who are in the sun consistently need to take special care.

"Man, it's hot, and so if they don't take regular breaks and drink a lot of fluid and stuff like that--they're prone to that danger," Steve Franks said, Denison Fire Department Lieutenant Paramedic.

Drinking water may not be enough. There are some things that a Bryan County Health Department Nurse says to avoid.

"Really sugar and alcohol are the two biggest offenders," Jenny Tuttle said, Bryan County Health Department Nurse. "People drink coke thinking that's going to hydrate them, but you know in fact it's just the opposite."

However, If someone still suffers from heat exhaustion--there are steps to take to make sure they stay cool.

"If you can, get them out of the heat," Franks said. "Get  them into somewhere cool--or at least get water to them, or anything like that to cool them down pretty quick, because if you don't, they'll progress onto heat stroke and that's bad."

A person suffering from heat exhaustion will show signs of dizziness and a lot of sweating. heat stroke symptoms include having dry skin, and even passing out.