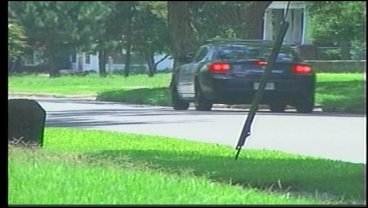 ARDMORE, OK- - Police continue to investigate the murder of man. He was found wandering the streets of Ardmore Tuesday night,  turns out, he'd been shot and died. But no one knows who he is or how it happened. Can you help solve a crime?

When they arrived on scene, they quickly realized he was the victim of a shooting.

He was rushed to the hospital but died an hour later. A day later, using fingerprint data, the Oklahoma State  Bureau of Investigation identified the man who was shot and killed as 29-year-old Michael Bradford Sloan.

Ruben Garcia with the Ardmore Police Department said, "Right now, the investigation division is investigating and it is considered a homicide."

Neighbors tell us they heard the shots.

"I was sitting in my house playing dominoes with my aunt and I heard just a couple of gun shots come from over there and I just I was surprised. I didn't know what to think," says Allie Reinhardt.

While area residents say they're not surprised there was a shooting in Ardmore,they are surprised it happened so close to home.

"There really aint that much trouble in these parts," says Reinhardt.

Her sister Ashley Reinhardt says, "I'm shocked that it happened around the corner from my house cause I aint never heard nothing like that before."

"Something will come up I'm sure," says Ashley Reinhardt. "It always does, everything always happens like that something always comes up and they find out something."

If you have any information about Sloan or the shooting, you're asked to call the Ardmore Police Department: 580-223-1212.