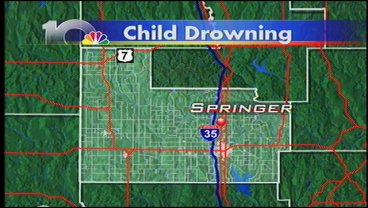 CARTER COUNTY, OK- - It was breaking news on KTEN news at 10, Tuesday night. Reports of a drowning in Carter County.

According to Underdsheriff Milton Anthony, a two and a half year old little girl, in Springer, drowned in the family's backyard pool.

Deputies received the call just after 9 p.m. that the child had drowned in the family's pool at 212 Richland Road.

So far no name released, but according to authorities it just a horrible accident.

The adult watching the toddler swim, stepped away for just a second and that's when she went under.