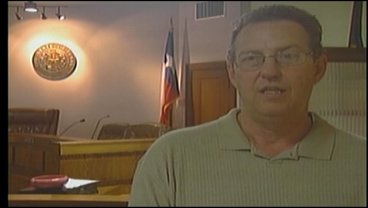 GUNTER, TX -- The tiny town of Gunter, Texas only has a couple thousand people, but in the future that population could grow by tens of thousands. Just last night, though, the city's long-time mayor resigned. Deeda Payton reports.

The mayor says he didn't resign over anything controversial, he just no longer wanted to continue as mayor. After all, being Gunter's mayor is a tough job that is only expected to get tougher as the city grows.

Change doesn't always come easy. That's what one small Texoma town is learning. Gunter, a town of less than 2,000 people is predicted to grow to 150,000 as the DFW metroplex expands. "I think it's good news. I'm sure there's a lot of people that don't like growth all that much and everyone that moves to the country wants to be the last one," said Mayor Pro Tem, Cliff Gibbs.

City leaders say what started out as a country community is now becoming a developer's dream. "We expect Gunter to grow, ok? It's gona get tough as soon as the economy turns around and the building starts and so forth that's our prediction anyway," said Gibbs.

One major development has already started. Maybe you've heard of the bridges. The country club neighborhood boasts a Fred Couples Signature Golf Course, but the pressure of keeping up with projects like these is already proving too much for some. Monday night, the city's mayor resigned. "I think it was just a matter of what does he want to do," said Gibbs.

Mark Millar says there just weren't enough hours in the day to be mayor and work a full-time job. And, the Mayor Pro Tem says it's only going to get tougher as the city continues to grow, but he admits it's an exciting time to be part of the city council. "I guess that there's a couple that wouldn't mind being mayor, including myself," said Gibbs.

While no one knows who will become Gunter's next mayor,one thing is for certain, they've got their work cut out for them.

The Gunter city council expects to appoint a new mayor in a couple of weeks. As for Millar, he is applying for a position as the City Administrator/ City Secretary which is a full-time job.