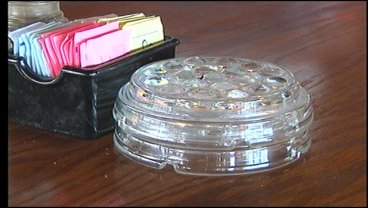 DURANT, OK--Several states have already banned smoking in public places, but in Oklahoma, it's still legal to light up in a restaurant or bar that has a separate room and ventilation system. If the business decides to go smoke-free, they could get a rebate

It's not unusual to light a cigarette while at a bar--or even restaurant--in Oklahoma. Smoking in public places is permitted in the state as long as there's a separate room and ventilation system. That could change if some restaurants decide to go smoke free.

"I think that they're not going to handle it well, and I think it will lose a lot of business and I think a lot of the smokers that I've had do tip the most, so I hope they don't leave," Brittany Mcdonald said, server.

The smoking room at Sports City Cafe in Durant is entirely enclosed with glass walls, but servers work in both sections.

"The employees have the right to breathe clean air," Renee Wyrick of CXP Tobacco Control said. "So it's not fair for to work in a place where other people are allowed to smoke, and then you have lung cancer because of a place that allows smoking."

Governor Brad Henry recently signed a bill that would issue a 50 percent rebate of the cost to build a smoking room if establishments decide to put out their cigarettes. It may discourage smokers from bringing their business, but it could attract customers of a different kind.

"The other customers who maybe have children with asthma or have health problems themselves you know--maybe they want to go in to that establishment, but they can't because of the smoke," Dawn Bonham of CXP Tobacco Control said.

So far 29 states have smoking bans in public places. Bar manager Ashley Gibson is from Iowa, and she says that the smoking ban back at home hasn't affected bars and restaurants too much.  However, she says that this sports bar does draw a smoker crowd.

"Mostly the sporting events probably stress people out--so they probably need to smoke with most of them," Ashley Gibson said. "Business is really good usually on the weekends."

For now, lighting up is still drawing a crowd.