After the Rains: Protecting Yourself From Mosquitos - KTEN.com - Texoma news, weather and sports

After the Rains: Protecting Yourself From Mosquitos 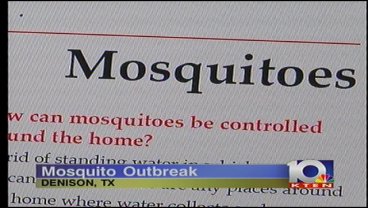 DENISON, TX -- The rains came and went, but the mosquitos are here to stay. It's that time of year again and the pesky little bugs are really biting. Deeda Payton reports on the best ways to protect yourself.

You may think of mosquitos as just annoying bugs, but mosquitos are also known to carry West Nile which can be deadly.

Mosquitos are dangerous all over the world, even the typical backyard mosquito can be a carrier of West Nile and other infectious diseases.

The Grayson County Health Department says they get calls every year from people wanting to know how to protect themselves and their property. "Anything that has the ability to collect water and remain standing. That's why people need to take inventory or take a comprehensive survey of their premises and any standing water they observe, they need to take the necessary steps to eliminate it," said Marshall Ward.

1.) Avoid being outside between "dusk and dawn" because that is the time when mosquitos are most active.

2.) "Dress" in long sleeves and pants when you're outside during those times for extra protection.

3.) Look for the ingredient "Deet" in your insect repellent. It should make up at least 20% of the spray.

4.) "Drain" any standing water because that's where mosquitos breed and it only takes a thimble full of standing water to do the trick, so clean out any gutters, bird baths and dog bowls.

According to a 2003 study by the Texas Department of State Health services, 77% of the people who got the most serious forms of West Nile infection never used repellent, so it's important to take precautions.