Denison Family Returns to Home to Find It Was on Fire - KTEN.com - Texoma news, weather and sports

Denison Family Returns to Home to Find It Was on Fire 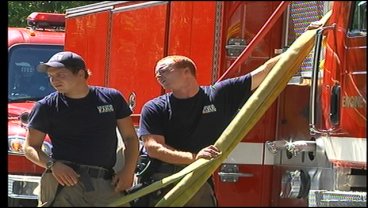 DENISON, TX--A house fire broke out Sunday afternoon. A family that was out of town returned to their home to find that nearly half of it was damaged.

The fire started on the 900-block of West Walker street in Denison. Around 2:42 Sunday afternoon, a neighbor called the fire department after he saw smoke coming from the back of the home.

"There was furniture--like about 40 percent burn rate inside the house," Denison Assistant Fire Chief Bill Ray said. "The rest of the house has water and smoke and heat damage."

A neighbor says that the people who lived there had just finished painting and remodeling the home.

Fire officials say that an electrical problem may have caused the fire.