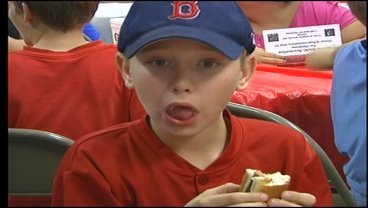 DURANT, OK--It's summer, and for some kids it's time to play some baseball. However, with the fees that come with joining a little league team, not all Texoma children can afford to play. This little league wants to change that.

Don Franks is a foster father of four, and because an Oklahoma little league is working to make the game affordable, his four sons get to play baseball.

"It makes a huge difference for us," Franks said. "I don't know anybody that can budget in how much it costs to raise one boy but the state of Oklahoma does the best they can do but anything can help and this was a stretch last year."

Bryan County Little League held a silent and live auction fundraiser as well as hot dog dinner Saturday to raise money to help pay for the fees and uniforms for kids who may otherwise not get to play ball.

"That's our goal--so that basically they can play baseball for free," Tim McClure said, President of Bryan County Little League. "It's America's game and we don't want to rob it from no one . . . some of the kids just can't afford it, and that's what we're trying to do, and the economy, the cheaper we can make it for them, the better."

Shaunda Mitchell is a single mother of two, and she still manages a full time job as a Pre-K assistant while attending school. She says that without the generosity of Bryan County Little League, her son and daughter wouldn't get to be part of the sport.

"It helps me out if they can play for free because I don't have to try to come up with the money and they get to play on a team that allows them to play in base or outside the bases--where ever they need to play in order to get self esteem and help them," Mitchell said.

As a foster father, Franks wants to make sure his sons learn important life skills.

"Like teamwork--like cooperation," Franks said. "Like you know how to compromise on things and how not always to get your way and besides they need a chance to succeed and to be on a winning team."

Which these boys get to learn, thanks to a few Texomans who believe that everyone should get to play ball.

Everything from boat rides to baked goods were being given away during the auction. Little league shirts were also for sale.