OSBI Works With Other Agencies in Skull Found in Murray County 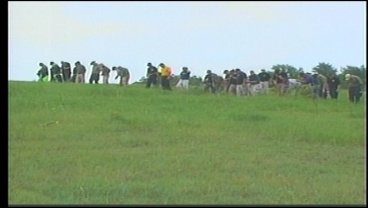 MURRAY COUNTY, OK- - A mystery, a human skull found in a field. KTEN's Meredith Saldana was invited on a search for an exclusive look at how law enforcement hopes to solve the case. She has more on this story.

Officials believe the skull found in late May, is that of a white male in his 20's.

They believe he may have died 3-20 years ago.

And now, because of few leads, they're asking for the public's help .

It was an odd discovery back on May 29th, a man brush hogging his property in Murray County, found a human skull.

Friday, another search of the area, hoping to find more evidence, anything that could help them solve this mystery.

OSBI agent David Seals says, "Of course the first part of the investigation will be to identify the deceased and that's where we're pleading with anybody with information about the identity or origins of this skull to call the Murray County Sheriff's Office or the OSBI."

And for the first time, law enforcement called in cadets from  the Cleet State Police Academy in Ada, to assist.

Trainer Tracy Shivers says, "It's giving them real life experience. So they have the added stress that they would have on a real crime scene of one, trying to find out who this person is to help the family have some closure and two, if foul play is involved they have the stress of wanting to bring that person to justice."

They are walking the entire area of property and placing evidence cards at areas of interest.

Murray County Sheriff Darin Rogers says, "Well, I appreciate it. We don't have the man power to do this sort of deal. With OSBI contacting the Cleet Academy and they sent down some cadets, it's good training for them and it sure helps us out a lot."

More than 20 evidence cards were placed in the field in the hopes of getting one step closer to identifying the remains.

"We need leads from the public, missing persons, family members that haven't been seen," says Seals.