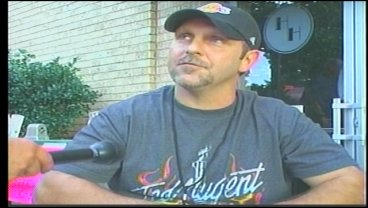 ARDMORE, OK- - Wednesday night rocker Ted Nugent was in Ardmore for a concert, but he was also there to help raise money for Ardmore officer Corporal Chad Anthony who was injured in may during a dirt bike race in Texas. Our own Meredith Saldana went backstage for an exclusive interview with the musician she has more on this story.

It was a packed house at Heritage Hall as people gathered to see famed rocker Ted Nugent and most importantly, to show their support for a Texoma officer in need.

But the big story of the night was rocker Ted Nugent joining forces with Texomans to help raise money for one of Ardmore's finest.

We went backstage and sat down with Nugent to find out how he got involved.

Nugent said, "Meredith, I think the most important part of this is I'm honored and humbled people would contact me when a hero needs help. That that connection exists is probably the most moving part of the whole thing."

"I know Chad's an animal. He's a rockin' roll, hunting guy. Chad is my blood brother but I'm not doing this because he's my buddy. I'm doing this because a cop is in need and we really cherish the connection and we have great respect for the heroes of law enforcement," says Nugent.

Nugent signed a guitar that was auctioned off as well as posters and offered several meet and greet's to help raise money for Corporal Anthony.

As the winners anxiously waited back stage, one told us he served with Anthony 10 years ago and wanted to help.

Sam Barrick says, "I think it'll really contribute to him getting better quicker."

Though a couple thousand was raised, you couldn't put a price on the comfort it gave Anthony.

"I can't describe what it really means to me because I'm definitely down. It's been really nice," says Anthony. "The city of Ardmore, I can't thank any of you, all of you enough. I'll owe all of you for the rest of my life."

And his goal is to return to serving the city of Ardmore.

"I'm hoping to be back doing what I want to do in my life and that's to be a police officer for the city of Ardmore."

Anthony has another surgery scheduled in about a month and says he hopes it's his last.

If you would like to donate to corporal Chad Anthony's fund, you can donate at the American National Bank.