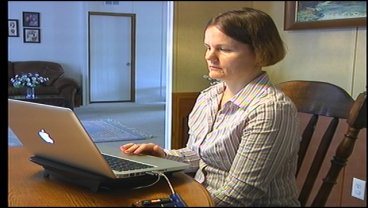 GRAYSON COUNTY, TX -- Millions of scams happen on the Internet everyday, but you never think it's going to happen to you. Deeda Payton spoke with one Texoma woman recently scammed out of more than $4,000.

The Grays were looking for a tractor to buy to clear their land and an Internet search on Craig's List led them to what they thought was EBay, but in fact, it was a gateway to a spoof site.

Trina Gray and her husband have big dreams for their little house just outside Denison and they thought a tractor they found online would turn their plans into reality, but it was all a sham. "We've been victimized and we feel horrible," said Trina Gray.

The couple started their search on Craig's List and ended up on a site they thought was EBay. "it got suspicious, unfortunately, after we spent our money," said Gray.

The couple wired $4,200 to someone claiming to be a seller out of Georgia who had lost her husband two months prior and needed to sell his old farm equipment.  "It all seemed completely legitimate," said Gray.

The Grays corresponded back 'n forth with the seller through email, but after they sent the money order, they say they never heard back. "We feel really stupid. We feel violated. My husband worked really hard for that money," said Gray.

After contacting the official EBay website and their support team, the Gray's learned there is a whole web site warning people of spoof EBay's and how to compare. And, when the Gray's filed a crime report, local law enforcement pointed out some suspicious details. "If they're asking for a money order, that should be a red flag not to purchase from this person," said Sgt. Ricky Wheeler of the Grayson County Sheriff's Office.  For the Grays, though, the information was too late. "We feel like not only did we lose our money, but our plans, things that were important," said Gray.

The Gray's are devastated by the loss and say they are embarrassed that they allowed it to happen, but they are sharing their story to hopefully save others from similar Internet scams.

The Gray's filed crime reports with both Grayson County authorities and the FBI, but say they don't know if they will ever see their money again.

If you would like more information on Internet scams, you can go to www.fbi.gov or www.ic3.com.