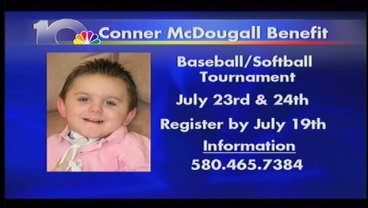 CARTER COUNTY, OK - - It's a little face you're sure to recognize. Conner McDougall, he's 5 years old now and despite a near death accident nearly four years ago, he's still on his long road to recovery. Meredith Saldana met with Conner's family and has more about a new way you can help this little boy.

Texoma has turned out and taken this little boy under their wing many times and Conner's family is so grateful for everything folks have done to help them over the years, now they need that help again.

It was nearly four years ago, a horrible accident in Dickson took the lives of Conner's father Chris and his brother Adam.

Conner was only one at the time and suffered a severe spinal cord injury.

His mother, Sonya, believes it was the power of prayer that saved him but to continue his recovery, Conner needs to go back to the Kennedy Krieger Institute in Maryland.

It's the same facility made famous by actor Christopher Reeve after his spinal cord injury.

But, that costs thousands of dollars.

This time, to help pay for that therapy, Conner's "Superman" team of volunteers is putting together a baseball and softball tournament.

His step dad, Robbin Hunter says, "He's come a long way. You know he wasn't supposed to survive and they told her to let him go because he wouldn't be anything and now he's a normal little boy, cries when he's mad, gives you the pouty face or he smiles when he's happy so you know he lets you know. You know matter of fact what's wrong with Conner."

The first 10 teams for each age group, 12 and under, 10 and under and 8 and under will be able to compete in the double elimination tournament.

The games will be held July 23rd and 24th at the YMCA ballpark in Ardmore.

July 19th is the final day of registration.

It's $100 per team and all proceeds benefit the Conner McDougall Benefit Fund.

We get a lot of questions about "How is Conner doing?"

Since we saw him last year, he is interacting more with expressions and movement.

Doctors say hopefully he'll be able to move and be more independent with this extra rehab.

For registration information contact Robbin hunter at 580-465-7384 or huntergraphix271@yahoo.com.