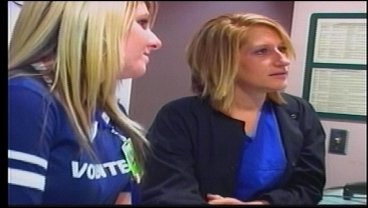 ARDMORE, OK - - This summer a group of teens in Ardmore are getting an up close and personal look at all aspects of the medical field. It's all part ardmore's Mercy Memorial Health Center's Volunteen program. Meredith Saldana has more on this story.

The program is 8 weeks long and teens 14-18 submit applications, references and a written essay in the hopes of getting a spot in the program.

Program director Shelly Antuna says, "The point of the program is to have kids give back to the community, give back to the hospital, learning to serve others and exposing them to health care. Letting them see all that a hospital is made up of and hopefully get them interested in health care careers."

Jecieka DeBord, 16,  is taking part in the program for the second summer in a row.

She wasn't sure what medical field she wanted to pursue in the future but says after last year's experience she decided radiology was her passion.

The program has not only helped her find her calling but has also taught the teens the importance of making the most of their high school classes.

"Especially in math and reading because I'm going to be doing a lot of it."

Conner Lindsey, 16, says, "It kind of teaches you that it would help to pay attention instead of kind of slacking off or goofing around with friends. It could help you with what you gotta do in the future, if you want to go into a medical field or something like that."

Lindsey says thanks to the program he wants to go into hospital maintenance.

"I'm enjoying it. It's my favorite thing to do really for the summer."

The director says the program helps the teens in future college endeavors as well.

"It's great for their resume, many colleges, many applications for scholarships are requiring community service so we can put their service hours," says Antuna.