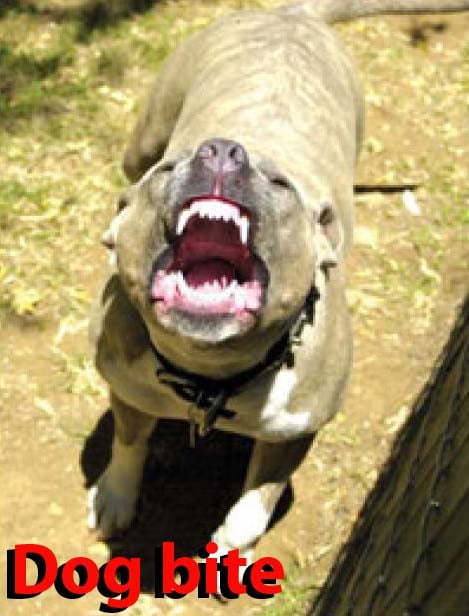 From the Durant Police Department:

About 4:15 p.m. Wednesday, Officer Scott Phelps was dispatched to 414 N.E. 4th Ave. in reference to a male subject, later identified as Chauncey Nelson, who had been bitten by two vicious dogs. Police dispatch further advised that the man was bleeding severely from both arms.

Upon arrival at the above location, Nelson was sitting on the east curb at 414 N.E. 4th Ave.. Nelson advised that one of the dogs that attacked him was in the yard across from him (415 N.E. 4th Ave.). Nelson had several wounds to his face, arms, and legs that were bleeding profusely. Officer Phelps observed a brown pit bull in the yard, barking viciously, approximately 30 feet west of that location. It appeared there was blood on the dog's legs. Nelson stated several times that two dogs attacked him in the middle of the road as he was attempting to walk home.

As they were talking, the dog walked closer to them and continued barking.

At approximately 4:15 p.m., EMS and the Durant Fire Department arrived at the above location to treat Nelson for his injuries. The dog started barking again, but more aggressively, and started to walk closer to them. At that time, Officer Phelps got his service weapon and pointed it at the dog. The dog then ran at a very high pace towards Nelson and the EMS crew. When the dog got within approximately 20 feet of Nelson and the EMS crew, Officer Phelps fired one round at the dog. The round that was fired struck the dog in the neck area. After being struck, the dog ran westbound through a private yard.

The deceased dog was located at 414 N.E. 2nd Ave. in the backyard. Animal Control took the carcass to the veterinarian to be tested for diseases. The owner of that dog, nor the second dog involved in the attack, has been located.