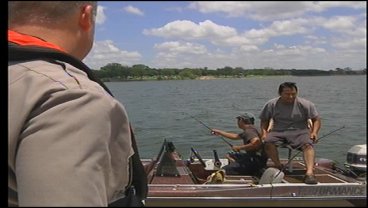 LAKE TEXOMA, TX -- Many people flocked to area lakes this holiday weekend making it a busy time for Lake Texoma. Deeda Payton rode along with the US Army Corps of Engineers as they patrolled to keep everyone safe.

Even though activity has slowed on Lake Texoma as the Fourth of July weekend comes to an end, one aspect isn't letting up and that's safety.

The U.S. Army of Engineers let me tag along as they patrolled and made sure boaters were following the laws of the lake. "Primarily when we're out on boat patrol, we're looking for overall general safety operations," said BJ Parkey with the Corps.

The first safety check is always life jackets, making sure every boat has enough for all of the people on board and that any children 12 and under have them on while the boat is in motion.

Then they check all vessels for at least one working fire extinguisher, and boater registration is, of course, a requirement.

Only a few warnings were issued during the corps patrol, but everyone seemed to learn a little something. "Make sure your fire extinguisher works all the time and your kill switch," said Tyler Ferguson who was stopped while on a jet ski.

It may seem like a hassle to get pulled over on the lake by the long arm of the law, but many lake goers say they are happy to do anything that helps keep them safe. "I mean you can't have 15 people on a boat and go oh dang we only have 5 life jackets. No, I think somebody needs to check that," said lake goer, Deleyne True.

Safety is especially key during a busy holiday, even if there are only a few hours left between the weekend and the work-week. As the Corps says, it only takes a few seconds to get in trouble and they are just there to make sure that doesn't happen.