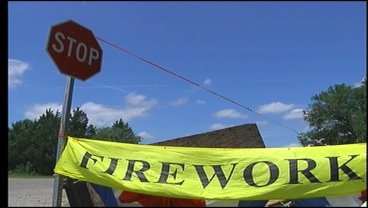 CARTWRIGHT, OK--Many Texomans are enjoying the holiday off, but after fireworks last night, an Oklahoma man says he's still cleaning up after the festivities.

The Fourth of July brings many celebrators out, and this Oklahoma town had quite the party last night

"I've had them from Puerto Rico, Jamaica--I've had them from all over the world come and see this," Koiner said. "It's the biggest fireworks show in all of these states. The rest of them around here have good shows--they last 15 to 20 minutes--maybe 30. Our show lasts four hours."

Jimmy Koiner is still cleaning up after the fireworks show he threw in Cartwright, Oklahoma Sunday. He claims that his show isn't only the longest, but the biggest show in the country.

Due to many cities banning fireworks, Koiner sees his celebration as an opportunity to let families light their own festivities.

"They don't have to worry about weather or not they can actually have fireworks," Koiner said. "So many different counties now outlaw everything. Well there's nothing for families left, but here you can come and enjoy it--shoot your fireworks and have a good time."

The fireworks lasted till almost 2:00 in the morning, and Koiner says he spent more than $5,000 on the show out of his own pocket.

"It lit the whole--it lit the whole world up," Koiner said. "People had a ball. They kept everything clean. We had no problems, we had no accidents."

Thanks to the area volunteer fire department and some of his friends, Koiner says everything was under control.

"We advertise," Koiner said. "People can come, bring their fireworks join in with us, and just have a great time."

A great time that Koiner says he'll bring next year.

Koiner pays for the show from the money he earns from his fireworks stand, and he's still selling them until July 6.