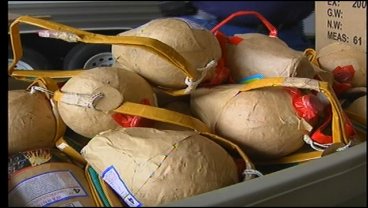 DENISON, TX--Earlier Sunday the Denison Fire Department was getting ready for the Munson Stadium fireworks show.

The Denison Fire Department has been preparing for the show since Thursday by filling up buckets with sand and tubes. Each firework is dropped into the tube before it's lit.

Fire department officials say that they have more than 500 fuses to light.

"Each tube is separated each year and we have to go fill up the buckets up with sand and then the tubes inside of that so that the fireworks are shot off individually one at a time," Dennis Snider of the Denison Fire Department said.

Thirteen firemen set up and lit fireworks tonight just 200 yards away from Munson Stadium. The show is anticipated to last 20 minutes.