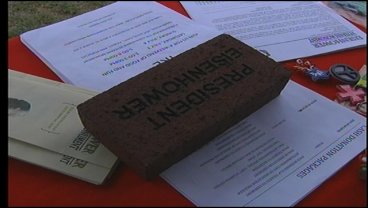 DENISON, TX--Soon, those driving along Highway 75 may have a sight to see. The Denison Main Street Advisory board is one step closer to getting the Eisenhower Veterans Monument built.

The board is selling bricks to anyone who wants their name or a phrase inscribed on them.  Money raised will go to the Eisenhower Veterans Memorial.

The Eisenhower Statue will Stand on the northwest corner of Highway 75 and Loyola Road in Denison. The county land was donated.

Veterans can get their name, rank and branch inscribed on them for $70, and everyone else can get the bricks for $100 a piece.

"This baby is 16 feet tall and bright white and it will  be lit at night 365 days a year," Doug Coleman said, of the Main Street Advisory Board. "This really is a tribute to Eisenhower. It's a tribute to the vets but it's a landmark for Grayson County."

Main Street Advisory Board member Doug Coleman says that the city hopes the monument will attract tourists and businesses to the area.

A Kiosk will be set up with pamphlets that give information on Eisenhower's birth place and other attractions in Denison.

Bricks will be sold Sunday from 5pm to 8pm at Heritage Park in downtown Denison.

They can also be purchased online at www.denisontexas.com or at Denison City Hall.