After Long Recovery, Durant Officer Back to Work 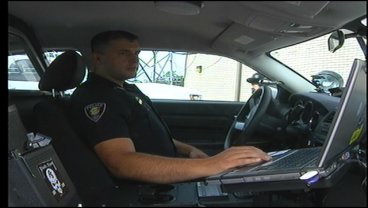 After being in a coma for a couple of weeks, officer Justin Blackshear woke up last October to find that he had several injuries.

"Broken right collar bone, eight broken ribs, detached muscle from my shoulder," said Blackshear.  "I'm working off of two of the three now. They never attached the other one back."

Friday was Blackshear's first day back on the job after nearly ten months of recovery. It all started during a pursuit in late last September. Blackshear says he can barely recall what had happened to him.

"It was a fight call that we were dealing with," Blackshear said. "I remember leaving that call and apparently we got into pursuit, and it stemmed off of there, and I was the backing officer out to help him, and I was going around a curve and lost control and struck a tree."

The wreck was the last thing that Blackshear could remember before he woke up to find himself in Parkland Hospital.

"When I woke up, we found out we were pregnant with twins, and then we had twins while I was healing through all of this," Blackshear said.

His twin daughters Haven and Kinlee are only three months old. Throughout his entire recovery, Blackshear's wife Carrie was pregnant with the girls while finishing nursing school. Carrie just graduated and is now a full-time nurse.  Throughout the healing process, his 3-year-old son Aiden was also by his side.

Now Blackshear is back, and ready to get the bad guys again.

"Haven't today, but the day's not over," Blackshear said.

Neither is his work week. Blackshear plans to be on patrol all holiday weekend.