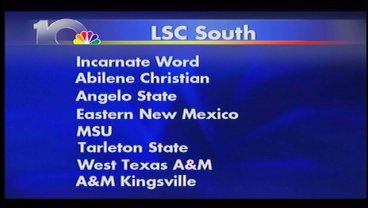 Big changes are on the horizon for the Lone Star Conference as we were first to report last week.  It looks like there will be five oklahoma teams leaving the conference.  But, they announced today that Incarnate Word will be entering the conference.  They will be a part of the LSC South, along with seven others.  The South has been the stronger of the two divisions -- by a longshot.  Of 46 crossover football games last year the south won 44 of those games.  This is what the South looks like now but expect some reshuffling to take place.

The first conference football game for Incarnate Word will be September 11th against Southeastern Oklahoma State in Durant.  SOSU, along with four other schools have expressed interest in leaving the Lone Star Conference.  They don't want to pay the additional $20,000 a year the conference wants from each school to buy TV time to air football games.  Conference Commissioner Stan Wagnon is in Florida today.  He says he's not going to stand in their way.