Taking the War on Marijuana to the Skies - KTEN.com - Texoma news, weather and sports

Taking the War on Marijuana to the Skies 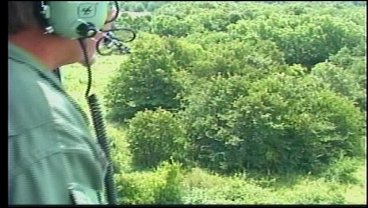 PONTOTOC COUNTY, OK - - The hunt for marijuana fields in Texoma is part of the Oklahoma Bureau of Narcotics fight against drugs. Meredith Saldana spent some time in the skies to find out what it's all about; she has more on this story.

Many people consider marijuana a gateway drug but OBN tells me it's more than that; it's a drug in itself and it's time to crack down.

Darrell Weaver, Director of OBN, says when it comes to fighting drugs education is key.

He started the morning talking about the latest trends in drugs from the increase in prescription drug abuse to marijuana.

Local law enforcement from the area attended the event as well as other Pontotoc County officials.

On Monday, several hundred plants were spotted growing in Pontotoc County from the OBN helicopter.

So Thursday we took to the skies searching for more.

I quickly learned that it's a skill I don't have.

"You have some individuals out here that literally can fly at 1,000 feet and see one plant growing and then they'll say, wait, wait, bank right. We need to look at that and bank over there and I'll be dad gummed if it's not marijuana growing," says Weaver.

Sure enough, one of the agents on our chopper spotted more.

He led agents on the ground right to the plants.

District Attorney Chris Ross seemed to have the skill.

"Once they showed you what the marijuana plants look like from the air it was pretty easy to pick them out in the group and amongst the trees so forth. So I was kind of surprised about that," says Ross.

Local law enforcement says using a helicopter, is much easier than the usual method of getting drugs off the streets.

"Usually we do it on foot, just get out and walk until we find it," says Sheriff John Christian. "So like I say, this is certainly an asset to our community to get these guys in here and do the work that they're doing."

While the helicopters are a quick ticket to spotting marijuana fields, they definitely aren't quiet and are pretty easy to spot in the skies but Weaver says it's all part of the war on drugs.

If you know of any drug activity in your area, contact your local law enforcement.