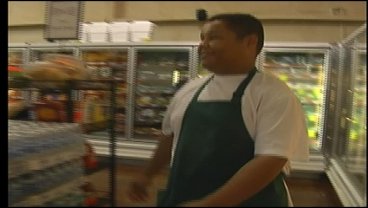 DURANT, OK--Thanks to a workforce program for youth, teens in Choctaw Counties can earn a paycheck, but it's more than just extra cash. They're learning important career skills.

It's summer break, but this teen is hard at work.

"It keeps me occupied during the summer," Patricia Gibson said. "It keeps me out of trouble really and the money. It helps a lot with family right now, having a lot of problems, the money really helps."

16-year-old Patricia Gibson is a secretary for the Workforce Investment Act, an annual summer job program for students in the Choctaw Nation Counties. She says that she wants to be a program counselor someday, but right now she's earning extra cash to help with her father's medical expenses.

"This program just prepares the kids for what it's like to be in the workforce, you know, what it's like to meet those customers face to face, to have to answer that telephone and take care of the problems that you know may come up and so it's a wonderful program," Patty Mink said.

Teens between ages 14 and 21 can choose jobs ranging from computer science to retail.

"It's been good," said Devin Delozier. "It's been real good. I've been making money, and I've been getting paychecks and stuff, and I think its fun."

After his paychecks, Devin Delozier says he wants to attend Oklahoma University and play football. Skyler Perkins says he hopes to become a network administrator someday.

"Basically just learned a lot of computer knowledge," Skyler Perkins said. "They're showing me networking here. They're teaching me how to network."

Gibson is among the more than 1,400 teens in the program funded by the Choctaw Nation and the Federal Department of Labor.

"Summertime you think they all wanting to be on the beach or something, but I'd rather be in here over that any day," Gibson said.