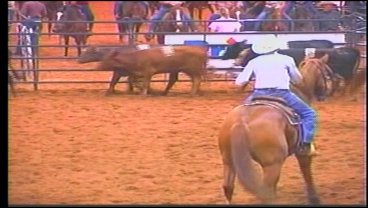 ARDMORE, OK - - A big event going on this week in Ardmore, the Ranch Sorter National Competition is being held at the Hardy Murphy Coliseum. Meredith Saldana has more on what ranch sorting is and what it means for Ardmore.

The event is fairly new and has been held annually in Ponca City, Oklahoma.

But it's grown in popularity and the group needed a bigger facility and  Hardy Murphy in Ardmore seems to be the best fit.

Just like you would do on a ranch and "sorting" has become increasingly popular in the last few years.

Coordinator Van Gemmill says, "RSNC started in February of 2007, had the first finals in Ponca City that October, actually had 900 teams. The next year we had 1,800 teams, then the 3rd year we had 3,300 teams. We're expecting well over 4,000 teams here at the Hardy Murphy."

The exciting event has draw folks from all over the country.

"Yes, we have people here from Florida, Michigan, California, pretty much all over the United States. Actually, I have some from even out of the states, Canada and Mexico."

Here's how it works, calves are numbered zero through nine and just before you start the announcers shout out a number.

You start with the calf with that number and then one by one you sort those calves into another pen.

But the key is to do it in numerical order and you only have 60 seconds!

It looks fun but we asked Gemmill what the point of the competition is, "The point of this is fun. This is all about having a good time, getting your pony up and coming and planning on sorting some cattle just like what happens on a ranch."

Gemmill tells me he hopes to make a long term arrangement with the Hardy Murphy Coliseum.

The event Saturday starts at 6 pm and there will be fun events for the kids as well.