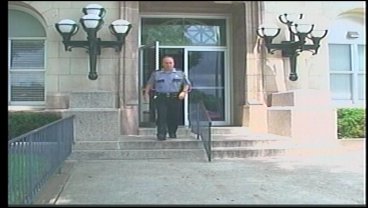 CARTER COUNTY, OK - - The Oklahoma budget crisis is hitting home and it could have affected public safety at a Texoma courthouse.  Just part of the cuts this year, pulling funding for  security officers in the district courts. Thanks to some quick thinking and creative math, the Carter County Sheriff  and several judges came up with a temporary fix to keep their courtrooms safe. Meredith Saldana has the story.

Meet John Ryan, he's a former Ardmore Police Officer and for the past two years has served as the courthouse security officer.

He has many duties from transporting inmates to and from court, making sure everyone who enters the court first goes through the metal detectors and monitoring the situations in court, just to name a few.

So when his funding was cut, naturally people were concerned.

"Oh, I was real concerned," says Carter County Sheriff Ken Grace. "It's such an important person to have over there. If anything bad is going to happen around here it's going to be at the court house. There's so many divorces and high profile trails."

District Judge Tom Walker agrees, "Every study that's ever been done says that if there's going to be violence it's probably going to happen in a domestic relations case. Especially if custody of children are involved."

District judge Walker says Ryan is a key component of the safety of not only employees, but anyone who walks through the doors of the courthouse.

"We don't have the expertise of a John Ryan. We may not spot something that he would spot or by the time we would see it, given that the jail is two blocks from here, by the time we hit our, I guess you could call it panic button and somebody gets over here, it's too late somebody's already been hurt," says District Judge Walker.

So the sheriff met with Walker and found another source of income to help pay Ryan's salary, at least through the upcoming fiscal year.

Sheriff Grace says, "Fortunately, we have a court security fund that we get $10 per each felony offense and it has built up enough to carry the officer through the year and hopefully next year they can pick it up again."

Ryan says he too feels security is crucial to the courthouse.

"Obviously people who come to the courthouse are not happy, things in their life whatever it might be, but it's all about trying to keep people safe," says Ryan.

And he says he's thankful that the sheriff and several judges stood up for the security of his job.