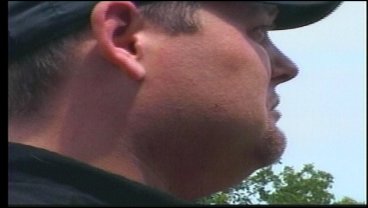 CARTER COUNTY, OK- - A local man is lucky to be alive after a scary situation this weekend. Just a regular old day, working in the garden, until he was struck by lightning and somehow lived to tell about it. Meredith Saldana met with him and has more on his story.

It was a scary situation for the Jones family who says they're counting their blessings and are thankful that John Jones wasn't severely injured.

Jones prides himself in his garden and hard work he puts into his yard.

Friday, it was slightly overcast and he decided to help his dad with his yard.

But it wasn't long before he was in a dangerous situation.

"I came around the south side of his house and heard a big boom and from there it kinda went down hill," says Jones.

That's when his dad rushed to his side.

"He came running over and asked if I was okay and I said, man, I think I got struck by lightning and he said, yeah you did. Told me it made me do a complete flip in the air when it hit me and I landed on my right shoulder," says Jones.

The paramedics were called and Jones was rushed to the hospital.

"The doctor came in and said that I took a direct hit, top of my head. Because I was outside working and sweating profusely, the current travels the path of least resistance, and since perspiration is primarily electrolytes the current followed on the outside of my body."

His arms were black and the hair had burned off.

The doctors told him because of his size, the current didn't get to his organs.

"I was like, okay, so I'm alive because I'm fat and now I need to lose some weight? And the doctor said yes."

His wife says now they'll think twice before going outside.

"It wasn't a big deal to play out in the lightning and the rain and stuff," says Rachel Jones. "So it's kind of taken us all a step back from the storms."

John adds, "I feel really lucky. I really do. As a matter of fact I should've went and bought a lottery ticket but I didn't."

John was wearing rubber Croc shoes that shot off of his feet when he was struck, allowing the current to exit his body, preventing further injury.