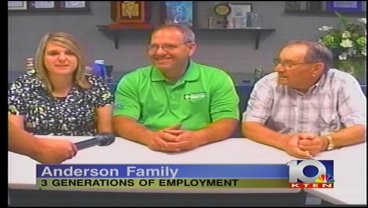 ARDMORE, OK - - It's a story that some might find hard to believe. In a time when jobs seem to come and go so easily, having a long term job, not just you, but three generations of your family. Ardmore's Michelin plant celebrated quite a milestone, 40 years in service to our Texoma community. Meredith Saldana has more.

You can bet the Anderson family has quite a  bit to talk about when they get home.

"My mom gets mad at us, me and my dad, because she says that's all y'all talk about is work, but it's just something we have in common," says April Anderson. "So it's nice to know you have someone there who understands what's going on in your life."

The Braden family also has 3-generations of Michelin employment.

Randy Braden's father worked at the plant, he followed suit and actually met his wife at Michelin.

"I guess one day I was working and this young girl here walked by and looked at me. About 2 years later we were married and shortly there after Lewayne came along," says Randy Braden.

Randy says he's glad Michelin has given his family the opportunity to be together.

"There are a lot of companies that if you have a direct relative then that prevents you from working but that's never been an issue here."

Families who work at the Ardmore plant tell me Michelin didn't just give them a job, but they actually provided them with a way of life.

"When we got married we didn't have a bucket or a window to throw it out of and over the years it's put us in a good situation for retirement when we get there," says Braden. "So we're thankful for that."