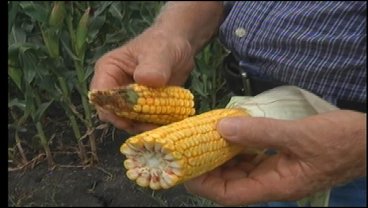 HOWE, TX--It's been drier than usual in Texoma these past few weeks, and its been impacting local farmers.

Though there's been the occasional sprinkle, a local farmer says its dry--too dry for his crops.

"Because of no rain and the heat, the kernels of the corn will dry down and a lot of them will never make," Jack Norman said. "And so we're not anticipating a really good yield at all. There will probably be some fields that will not be harvested at all."

Local farmer Norman produces corn, soybeans and wheat. He says that for the past five weeks, there hasn't been enough rain. His corn fields need at least two to three inches of rain to produce good yields.

"It's not good for profits," Norman said. "It's one of those challenges you face when you farm."

Because of the dry weather, Norman says that he only expects about 40 bushels per acre this season instead of the usual 100.

"Well our conditions are really dry during this time of the year," said Chuck Jones, Grayson County Extension Agent for Agriculture & Natural Resources. "You know, our major warm season crop here in Grayson County is corn, and it did pollinate well, but the ears are actually not filling out, so the kernels themselves are not filling out because of a lack of moisture."

Grayson County Extension Agent for Agriculture and Natural Resources Chuck Jones says that the crops that have suffered the worst are soybeans and corn. With the lack of moisture, soybean fields that can't produce beans could have to be made into hay.

"If they're not going to make the beans or the pods then the only thing that you're going to get of value is maybe some hay," Norman said.

Norman says that farmers who raise livestock may have it the worst if there's not enough green pasture to feed the cattle.

Though not a drought, this year is bad enough to effect Texoma farmers.