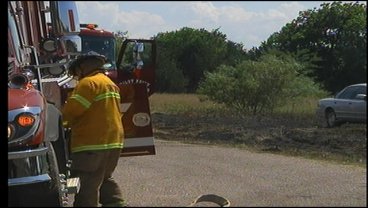 Eleven miles north of Whitesboro off of State Highway 377, on Pine Grove Road, fire departments received calls around 2:30 about a grass fire.

Surrounding farmers were concerned as the fire expanded into a much bigger one--as large as 70 acres.

"All of the smaller departments around here have to work together when something like this happens. Whether its with money or with water in the summer time or however. It's a hard job and these guys put their lives on the line," Carol Blackwell said, Sherwood Shores Fire Department Public Information Officer.

Two structures were threatened, one of which was a farm. Two fire fighters were treated for heat. The fire was mostly extinguished just before 4:00pm.

Hot spots were still being put out in the field Sunday afternoon.

Investigators are still trying to figure out the cause of the fire.