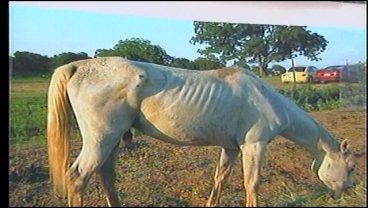 DENISON, TX--Some Texomans are fighting against animal neglect and cruelty. A group of friends started planning a benefit so that abused horses can be saved.

Philip Lombardo says he saw something he just couldn't forget.

"We had an extreme case of abuse toward horses, I mean when I saw the pictures, I mean my heart just bled. I mean it would really break your heart," Lombardo said.

Lombardo owns a ranch and farm supply store and has been helping one woman feed abandoned pets, but when he met with an animal cruelty investigator--and learned what she did for horses--he decided he wanted to help too.

"So I figured why can't I donate some time and I think its going to be a great deal for us," Lombardo said.

Lonestar Ranch & Supply sponsored a benefit to help Habitat for Horses. Several musicians and performers came Loose Wheels in Dension, TX to help the cause. One performer says he's here because he wants to stop the abuse.

"Some neglected donkeys, several of them had passed away and there were some dogs that weren't being fed, and they were feeding on the donkey carcases. Just you know, cruel, cruel stuff," Robby White said, musician.

A cruelty investigator says that many of these horse abuse cases are due to neglect.

Horses are more than just for riding. One woman's organization uses them to rehabilitate people with physical disabilities.

"Children with special needs of all kinds. It can be anything from  cerebral palsy to down syndrome, to autism, to ADHD to emotional issues," Lisbeth Echeandia said, Executive Director of Hannah's Horseshoes of Hope.

Confidence that Habitat hopes to pass onto these horses

"They can donate anything to this Habitat for Horses," Lombardo said. "I mean whether it be hay or feed or money. It's all done on donations."

So that someday, these horses can have safe place to stay