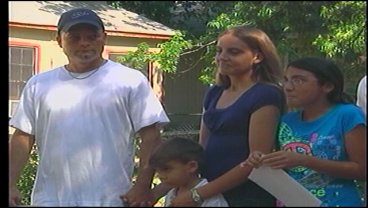 SHERMAN, TX--For many people, owning a home isn't within reach, but for one Texoma family, their dream became a reality.

If Luke Shepherd was asked where he lived just a few days ago, he certainly wouldn't have said here.

"Apartments . . . apartments here or there. It's nothing compared to this house," Luke Shepherd said.

Saturday, the Shepherd family gets to move into the home that they've been working on for nearly three months, thanks to Habitat for Humanity.

"So there was a work crew working even yesterday on the house--so this house took from the first of April tilt basically the 28th of June to finish," Laurie Mealy said, Executive Director for Habitat for Humanity.

This isn't the first home that the Shepherd family helped build either.

"We've worked with Habitat for four or three years now," Kristine Shepherd said. "We've helped with three other families--three other houses--and now we're working our ours. We've worked over 400 hours."

"It's incredible--to be part of something bigger than you are," Luke Shepherd said. "It's the whole town . . . One house at a time making everything better.

Now the Shepherds can leave their apartment parking lot for a backyard, and Luke says that he has big plans for it.

The Shepherd children, Marc and Ashley, offered a tour, and it was obvious which rooms were theirs.

The whole home was the product of more than 300 volunteers and thousands of hours of work.

"To the homeowner, it means so much, because there's a lot of love put into these houses," Luke Shepherd said.

Habitat for Humanity Executive Director Laurie Mealy says that 95 percent of Habitat home owners have never owned a home before. Members of Habitat say they have plans for house number 22.