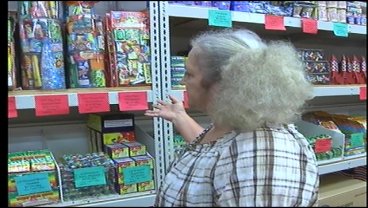 DENISON, TX--The Fourth is about a week away, and one fireworks outlet in Denison says they expect to be sold out just before the holiday. When handling fireworks, the Denison Fire Department wants to make sure celebrators stay safe.

For this store, Fourth of July means business.

"The men like big party packs, and for children we have the buckets, the big pails, small pails, where it has everything it for little kids," said Tolley.

It also could mean business for the local fire department if celebrators aren't careful.

"So probably, some pre-thought should be put into where you're going to actually be shooting your fireworks off what's around the area, what could possibly catch on fire," Bill Ray said, Denison Assistant Fire Chief.

It's illegal to light fireworks within Denison city limits and store manager Sharon Tolley says that many of her customers are smart enough to fire their festivities in a safe place. She expects sales to be good this season.

"Yea it's like the end of the world--you know--like if you don't get them today, you'll never get them, and so people just buy everything," Tolley said. "Everybody gets in the mood for 4th of July They get in the spirit of wanting to shoot firecrackers off."

Assistant Fire Chief Bill Ray says to take a couple of precautions before lighting the fuse.

"Probably use a platform of some kind for an ignition source, I mean, when you're infighting the fireworks, have them on a platform so it actually doesn't set the grass on fire," Ray said.

Though stocked now, Tolley says that these shelves will be empty by the Fourth.

Assistant Chief Ray also says that when celebrating to ensure the area is clear of tall grass, buildings and trees.