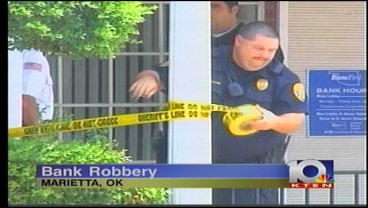 LOVE COUNTY, OK- - A second bank robbery in Texoma in as many days. Now authorities believe they're looking for the same man.   Meredith Saldana was on the scene in Marietta; she has more on this story.

Law enforcement tells us the suspect from Thursday's robbery does appear to be the same man who robbed the IBC Bank in Ardmore Wednesday.

The robbery Thursday afternoon happened around 1 pm at the Bank First office on 2nd Street in downtown Marietta.

The robbery seems much like a carbon copy of Wednesday's robbery.

Undersheriff Jason Bone tells KTEN the man walked into the bank, handed the bank teller a note, and left the bank headed southbound with an undetermined amount of cash.

Several law enforcement agencies are now working together to find the bank robber.

"Right now we've got the Ardmore crime scene lab down here to try to lift some finger prints and stuff like that. The FBI's been notified; they're in route. Right now the sheriff's office's just assisting the PD on this; will do whatever they need us to do," says Bone.

The Undersheriff tells us the suspect was wearing similar clothing, a dark shirt, what appears to be the same ball cap and sunglasses.

Anyone with information on the robbery is asked to contact the Love County Sheriff's Office.