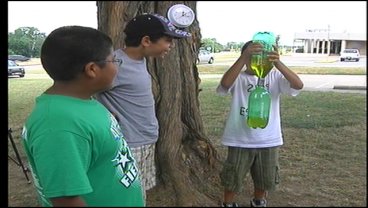 SHERMAN, TX--MasterKey Ministries is hosting a summer camp for children, and this week they're learning about storm chasing. Within a few years, they could be giving Texoma its weather forecast.

"You know its obviously a passion--it's something that I love," Hair said. "I'm infatuated with the fury of weather.

These kids want to be like him--storm chasers. Some want to be meteorologists as well.

"I want to tell people what the weather is, and um, I'm hoping to chase storms--like thunderstorms and tornadoes," Madisyn Gwatney said, 5th grader.

"On TV like the weather forecast dude," Daniel Garcia said, 9th grader. "Telling people, the city, the temperature of the week."

Within a few years, students at this summer camp could be telling Texomans their weather forecast. Fifth-grader Madisyn Gwatney is already describing the anatomy of a tornado.

"When cold air and hot and warm air form together and um, it just makes a funnel cloud," Gwatney said.

But chasing storms is only half of the battle. How to take cover is what these kids are learning today.

High school sophomore Elizabeth Armstrong warns of the dangers of a micro burst. She says they can destroy a structure in an instant.

"They are a bit of air that goes up and back down. It's like a swirl of air almost," Armstrong said.

The dangers of weather doesn't scare these kids. It intrigues them. Daniel Garcia, 9th grader, loves to watch storms.

"It's world wide, so its pretty much a world wide intercontinental job, and you really get to go places and travel places--know things people don't know usually," Garcia said.

Soon these kids could be the next Kris Hair--traveling the country and chasing storms.

Hair says that families should designate a shelter area in the event of a dangerous storm, preferably a cellar, but may also be the inner-most part of a home which has no windows.