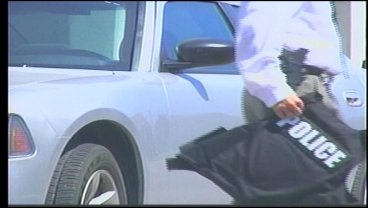 It happened just after 10:30 Wednesday.

Police do have a suspect description and pictures of the man.

Now, they're asking the public to help identify him.

The robbery happened at the International Bank of Commerce, better known as the IBC Bank.

The Ardmore Police Department spent the morning investigating the robbery and are also working with the FBI.

Sergeant Ruben Garcia with the Ardmore Police Department says the man did tell the clerk that he had a gun, but didn't show it during the robbery.

"The individual went in with a note, showed it to the clerk demanding money. The subject left the bank after receiving the money at an unknown location or unknown direction of travel," says Garcia.

Ardmore police are looking for  a white male in his early 40s, about 6 feet tall and weighing 195-225 pounds.

He has short hair, was wearing a blue shirt and blue pants, a ball cap and sunglasses.