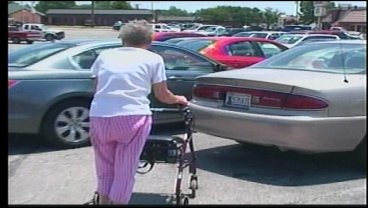 We have an important warning for drivers.  If you are caught parking illegally in a handicap designated parking spot in Oklahoma, the fine has now more than tripled. Meredith Saldana has more.

House Bill 2567 was passed unanimously by both sides of the house and was signed immediately into effect by Governor Brad Henry.

Previously, if you were cited for parking illegally in a handicap spot the minimum fine was $150 dollars.

Legislators say, many times drivers illegally park in handicap spots because the law is rarely enforced.

With municipalities receiving 80% of the fines, one local law maker is hoping it will serve as incentive to take action against violators.

"You know, you don't want them just going out and doing this just for funding purposes, but I believe that it's good for incentive to keep a closer eye and to make sure," says Representative Sam Buck.

He says the safety of the disabled drivers is a top priority.

"You just have to be very conscientious, because you know I'm sure a lot of people think, well I'll just be in a minute, it won't take that long. When in actuality, you could be putting a person at risk," says Buck.

One of the people you could be putting at risk is 90-year-old Katherine Frazier and she has some words for violators.

"I'd tell them to go find a place where they can park and let somebody else have that, that wasn't able to get out. Especially in this hot weather you know it makes a lot of difference," says Frazier.

Frazier relies on her walker to get her from her car, to her final destination.

"The people that comes along that are handicap don't have a place to park. You know they just have to go find another place and they've gotta walk a long ways."

But Frazier's not sure that raising the fine will deter those who park illegally in handicap parking spots.

"Some it may and some it may not. They may just be careless," says Frazier.