Denison Council Votes to Keep Main Street, but With Adjustments 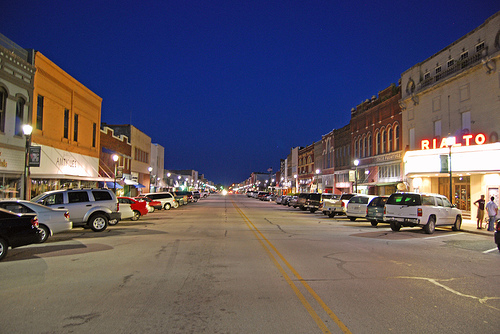 DENISON, TX--With a unanimous vote, the council decided that they would keep the Main Street program with a few exceptions. The next director hired can expect to be interviewed by a committee and possibly have more job duties.

Despite its size, Denison, Texas has attracted this former business owner all the way from Montana.

"And one of the main reasons we chose Denison was because they had an active downtown program that was trying to promote the businesses down here," Tamara Mease said, Country Java former owner.

Since Amy Lay, the former Director of Denison Main Street, resigned there have been talks of possibly scrapping the Main Street program. But Monday night, the council unanimously decided to keep the position. The next director may have some extra job duties though.

"We need a cheerleader," Mayor Robert Brady said. "We need someone who can go out and promote us and help us bring new businesses to downtown."

Currently the council is putting together a committee to interview applicants for the Main Street position. Brady says that council is still deciding what those extra duties would be. Kathy Hendrick, a former Denison Main Street Director, says that adding more work to the full time position may not be the best idea.

"You're just as busy as can be and you really wouldn't have time to do additional jobs and duties, but I think it's good that they're looking at it," Hendrick said.

Many business owners who attended the meeting said that they were satisfied with the outcome. The new owner of Country Java Hopes downtown will attract more businesses.

"And a lot of people come down here and patronize this small coffee shop. It's not a franchise and we've got the personal feel," Nancy Gentry said, Country Java owner.

A personal feel that this business says gives downtown its charm.

Denison Mayor Brady says that he hopes to have the interview committee appointed within two weeks. He also plans on including downtown businesses in the process.